TatorTot, the Pit Bull, Saves the Life of a 4-Year-Old 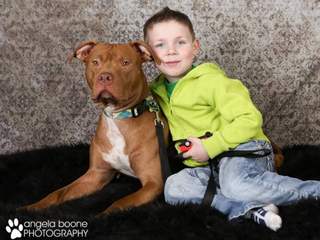 A pitbull, named TatorTot, was rescued a few hours before it was set to be euthanized returns the favor a few days later by saving the life of a 4-year-old boy.


Christi Smith, a veteran foster dog-mom, had intended to find TatorTot a permanent home.  She felt TatorTot would be too vivacious for her calm abode.  Ruff Start Rescue asked Christi if she could foster TatorTot but she was still apprehensive.

“They had emailed me, asking me to take him,” Smith says. “But I thought he would be too high-energy for us; I thought our house would be too mellow for him and that he’d end up going stir crazy.”

Her objective was to find TatorTot a loving family who could handle the puppy, TatorTot still being only 9-months old. This would change a few days later when TatorTot would become a hero.

Christi put her son, Peyton Anderson, down to sleep around 8:30pm.  A few hours later Peyton awoke, asking for a drink of water and acting a little strange.

Smith says. “He woke up between 12 and 1:30 to ask for something to drink. He was acting weird — really out of it. I chalked it up to being deliriously tired. I wasn’t too concerned.”


About 20 minutes after Peyton went down to sleep again, TatorTot started running back and forth between Christi’s and Peyton’s bedroom making quite a fuss. Christi was surprised TatorTot had so much energy since he had exercised earlier that day.

“Finally, I went to check on my son. He was barely breathing. TatorTot was on his bed, barking and pawing at him, licking his face. Any normal child would have woken up. He wasn’t waking up.”

Christi picked up her son and drove him quickly to the emergency room.  The doctors discovered Peyton had extremely low glucose levels and worried he might be diabetic. Tests have determined Peyton is not diabetic and the doctors are still trying to determine why the low glucose levels occurred. Christi was told by the doctors that her son could have died or gone into a coma.

Even though TatorTot is still young, he certainly seems to possess the instinct to detect glucose levels in humans. As stated by the Diabetic Alert Dogs of America: “A dog specifically trained to react to the chemical change produced by blood sugar highs and lows. Diabetic alert dogs can provide emotional security and a sense of balance for individuals and for those who have a loved one with diabetes.”

Christi is no longer seeking a permanent home for TatorTot and has decided to adopt him. Christi, Peyton, and TatorTot are living happily together.