Do You Need Umbrella Coverage? 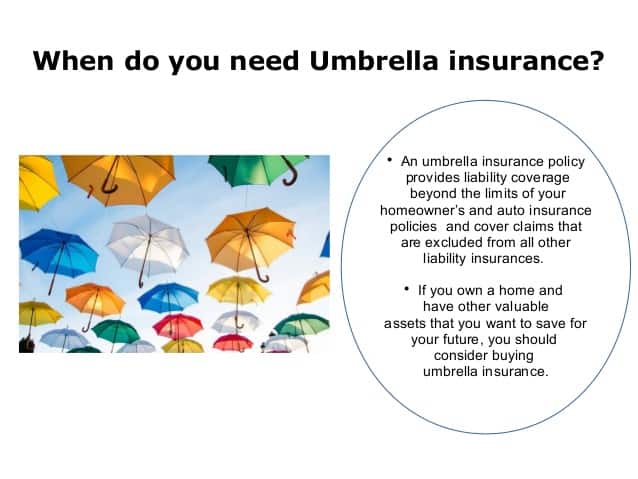 Do You Need Umbrella Coverage?

Umbrella coverage isn’t just for the rich and famous. Having a good umbrella policy attached to your homeowner’s insurance can protect an average person’s future earnings as well as their current assets from our lawsuit happy culture. All it takes is one slip up on your part to find yourself part of a lawsuit.


Besides, who knows how much a judge or jury will award a plaintiff anymore? Sometimes, you don’t even have to do anything to be named in that lawsuit! That’s where umbrella insurance comes in.

In 1999 I worked for a company that folded so, like many other people do, I started my own. Several weeks later I was named in a lawsuit brought by some ex-employees of the folded company who claimed that I had used their bonus money to start my new venture. Nothing could have been further from the truth and the suit was quickly dismissed with prejudice (made the judge mad, I suppose). I did have umbrella coverage at that time, so I wasn’t too worried, but you never really know where a lawsuit will go these days. That umbrella coverage did allow me to sleep at night!

What is Umbrella Insurance?

Umbrella insurance is a liability only policy that covers policyholders against the risk of losing a lawsuit where the judgment exceeds the liability limits of a homeowner’s, auto, boater’s or other insurance policy. Umbrella insurance covers a lot (hence the name “umbrella”) and some policies even cover items like:

How Much Coverage Do You Need?

Most umbrella policies start at $1 million in coverage and increase in $1 million to $5 million increments.  Coverage is relatively inexpensive, so it’s a good idea to buy as much coverage as you can reasonably afford.

When deciding how much coverage to buy, consider:

Umbrella coverage is relatively inexpensive. For example, a $1 million policy costs an average of $150–200 annually. For each additional $1 million you add to the policy, costs typically range from $60–100 annually. The premiums you pay for umbrella insurance depend in part on the amount of liability coverage you already have on your homeowner’s and auto insurance policies – the higher the amount of existing coverage, the less you’ll pay for umbrella insurance. Your state may have different regulations concerning coverage amounts and/or premiums so be sure and check with your agent.

How to Buy Umbrella Insurance

It’s usually best to buy umbrella insurance from the same insurer or agent who sold you your car insurance or homeowners insurance. That way you’ll be sure that your provider has a thorough understanding of the coverage you currently have and, therefore, how much umbrella coverage you need.

Anoop Nain has spent a number of years in the insurance industry in sales and sales management. His most recent responsibilities were recruiting, training, creating and executing sales and budget plans. Now owner of http://www.insurancetron.com/